Let me pay the vet bill with all this extra money, said no horse owner ever.

A million things have happened. Some good, some bad.

First since many of you have asked about Moose. Moose is doing fine...At least now he is. He did try and die on me a month ago. It went from being very mild the end of November to frigid and freezing rain. For whatever reason he didn't go into the shed. It rained all day and when I went to feed him grain at night he was shivering. Shivering was ok so I went to get a blanket to put on him wile he ate and warm him up. I walked him to the tack shed; a place he normally makes a nuisance of himself if I leave him loose by knocking everything over. He started backing up at the door and backing and backing. Thinking he was being a pill and not wanting to come inside I kept tight on the lead rope. He backed and backed and at this point I noticed something was seriously wrong, he wasn't backing to be defiant, he was backing to stop from collapsing. He fell down with a great thud and began shivering violently.
Now if you have ever been in a predicament with a horse that has gone into shock let me tell you he wasn't a far cry from this. I bolted to go find Maverick in the shop (who was unhappily plucking roosters with his dad). When I came back Moose was still on the ground. I managed to get him sitting back up and urged him to his feet. He reluctantly got back up and started following me (with 3 horse blankets on his back) but he only got another 50 feet before collapsing again. It was raining, blowing wind, frigid and a Sunday night. No vet would come out, I was on my own. We made a quick decision and grabbed the loader tractor and rolled him into the bucket to get him the other 150 feet to the shop so he would be totally out of the elements.

He laid on the shop floor with heating pads, two heaters and a heap of blankets for two hours without trying to get up or move. I rolled him over every so often to prevent nerve damage. He laid there, breathing and closing his eyes for long periods of time. I called numerous vet's, the university, anyone. I fed him Gatoraide and handfuls of his grain (as mush from his choking incident he no longer gets un-soaked grain). He ate slowly, sighed, slept. Finally he started to lift his head. He picked it up to look around as something loud was dropped (remember, Maverick and his dad are grumbling and plucking roosters in the shop this whole time) but then laid it back down and slept more. After picking up his head several times I made him sit up and stuffed his bucket of grain under him. He began to eat greedily but laid back down after a few mouthfuls. After several rounds of sitting up and eating we urged him to his feet and he stayed there, munching grain happily and sipping Gatorade. So we went and got a couple bales of straw and a bale of hay. Itty bitty spent the night in the shop, happily munching hay with Ginger's too-big pink pony blanket. 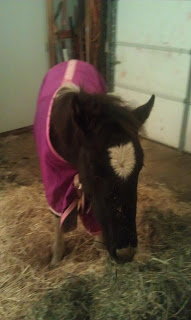 The next morning I opened the shop door and he tore out like someone lit a rocket under his butt, broom tail in the air before settling to eat grass by the driveway. Yes I let him loose, he doesn't have a terrible attachment to the herd, but he does have his favorite surrogate horse family members he sticks close to when with them. He eats grass and comes to find you on the property when he wants back in the pasture.

But he is fine now. For precautions and because foals don't have a lot of fat he got his very own (54 inch) foal blanket that is weatherproof and has a light fill. He gets it on when it is below freezing or raining/snowing. 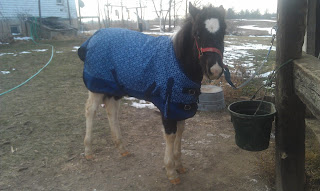 Moose is ticked off. I called him to the hitching post and didn't feed him. He is the little master of expressive face making, right under Indigo.

Other than that he is great! I told him that night that he couldn't give up and die on me; I was going to ride him and drive him when he got older first.
Moose loves going for walks to new places, playing with the dog's and eating. Did I mention eating? Well this colt LOVES TO EAT. He's growing up into a well mannered, friendly little colt.

Indigo got some sort of mystery eye issue. I brought her to the vet because her one eye was weeping. Usually when her eye weeps I put her fly mask on a day or two and it resolves. No this one. It was in her right eye and she would barely open it and it weeped, bad! 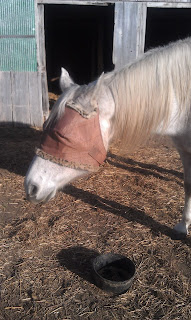 Leopard print fly masks in December. Not the fashion statement I was hoping for.

Several vet visit's and a good dent in my Christmas gift money later and I still had a horse who couldn't open her eye and Three ointments I had to put in her eye four times a day, every six hours. I thought after a couple times of this she was going to (metaphorically) give me the horse middle finger and run when she saw me coming, but she didn't. She met me at the gate every time and let me poke her in the eye without a halter on, several times a day for a longer time than I wish. 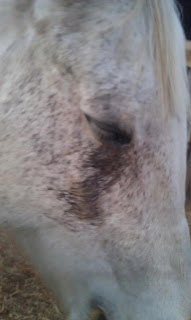 Poor Indigo. The vet ruled she had a very light ulcer on the very surface of her eye but the next time I went it was gone. Her tear duct was clear but her pupil remained dilated and under her eye was swollen. You had to talk to her when you walked up on her closed eye side or she would jump then look at you with her head tilted sideways.

Finally after a month and a half, her eye getting better, then far worse. I was at whits end. What if she lost her sight? What if it never got better and she was forever squinty eyed. Finally after being told again by a vet to "just leave it and see what happens" I gave her a supplement. It's for people and reduces oxidative stress. I take it every day personally and have given it to Ginger for her fused back pastern. It did wonders for Ginger's inflammation, taking her from dragging her hind leg to picking it up and running across the pasture, what could it do for my horses obviously swollen and weepy eye. Well in a week it did nothing less than I expected. 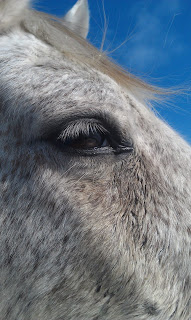 A week later. What a difference. Lovely to see your beautiful brown eye again my spotty horse (the morning sun was right on her face she isn't squinty anymore)

Sheesh. Nothing like animals to add drama to your life. I'm glad it all worked out for both horses and hope you have some money left.

AmberRose- Girl With a Dream said...

So much Drama has been going on but I am soooo glad that moose is okay and that Indigo's eye is healing up. Hope you have some money left over!

I can't even begin to imagine how terrifying your experience with Moose must have been. I am glad he recovered. He is a strong little/big guy!

Glad to hear things turned out ok. Was nice to see you and the horses!

Glad your ponies are both back to feeling better. I'm in the middle of my own unresolved lameness vet issues and understand feeling the financial pinch.

When my horse was in trouble I know I had to call my vet for assistance. I know I am not well-versed in illnesses of horses and this is why constant vet supervision must be done. Our doctor from a portland vet center always come and visit my horse lately for a check up.

The revolution that is taking horsemanship by storm!

Grab a horse and tack up for some bitless fun. I promise you or your horse will not be dissapointed. If you have any questions please e-mail me sydney@bitlesshorseblog.com or with questions about the nurtural bitless bridle and training at sydney@nurturalhorse.com 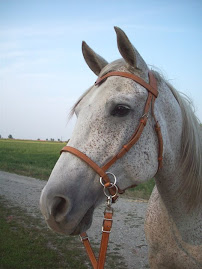 The fastest growing revolution in horsemanship: Bitless. The bitless of choice from Indigo and I to you. We have tried everything form hackamores, bosals, sidepulls, halters and other cross under bitless. Hands down the Nurtural bridle gives the most prescision and control. Bring us a horse, any horse. Whatever that horse does in his current bit or bridle he will do better in the Nurtural bridle or your money back. Make sure to tell Zoe and Gerry that Sydney sent ya from the bitless horse blog. www.nurturalhorse.com

Naturally I try and keep my horses barefoot. However driving on pavement and over stone miles and miles at once takes it's toll on my horses feet. Try a shoe that flexes like the natural hoof. Try an EasyWalker horse shoe. They are like a pair of Nike running shoes for your horses hooves. If you buy a pair make sure to mention Sydney sent you.

The places we have been

RUN AND HIDE! They are following us! 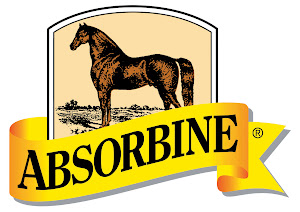 For the inner cowgirl in all of us

Bitless is for every horse but not every rider

Images and content copyright www.bitlesshorseblog.com unless otherwise stated. Contents are not to be reproduced, re-used or manipulated in any way shape or form without prior written consent.

Music worth lending an ear to